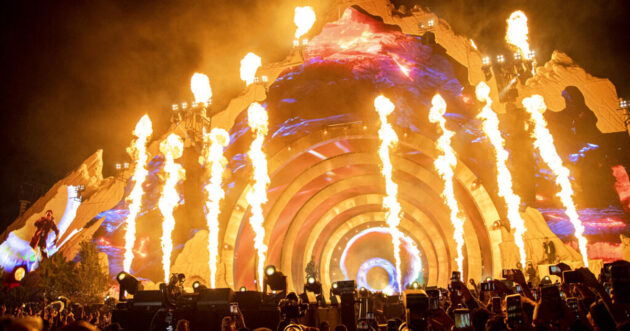 The remainder of the two-day festival has been cancelled.

Eight people died and hundreds were injured after crowds surged the stage during Travis Scott’s performance at his Astroworld festival on Friday night (Nov. 5).

Houston’s ABC News reports over 50,000 people were in attendance when the melee at the sold-out outdoor music festival at NRG Park when the incident began at 9:15 p.m. CT, officials said. “The crowd began to compress toward the front of the stage, and people began to panic,” said Houston Fire Chief Samuel Peña.

More than 300 individuals were treated at a field hospital since the event began from a series of stampedes, including those hurt during the fatal incident. Harris County Judge Lina Hidalgo said one of the injured victims was 10-years-old. Houston Police Department’s Executive Assistant Chief Larry Satterwhite was among the 367 police officers and 241 security officers on-duty at the festival.

“Once we started having the mass casualty incident, they were starting CPR on several people, and it happened all at once,” Satterwhite said during an early morning press conference. “It seemed like it happened over the course of just a few minutes. Suddenly, we had several people down on the ground experiencing some type of cardiac arrest or some type of medical episode.”

Festival founder and headliner Travis Scott was on stage with surprise guest Drake before the incident happened. The remainder of the two-day music festival has been canceled and the location is now a crime scene by investigators.