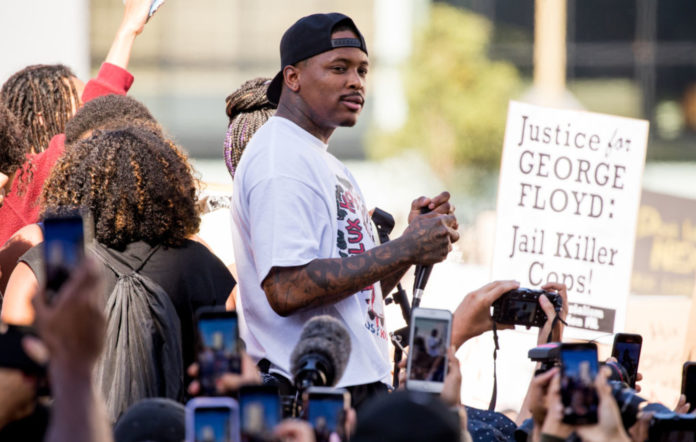 A Donald Trump supporter has been charged with assault after allegedly punching a man in the face for refusing to stop playing YG’s track ‘FDT’.

According to TMZ, the altercation took place at an anti-Trump rally on Saturday (October 3) held outside of Buc-ee’s convenience store in Denton, Texas.

A video from the incident appears to show a man yell “turn it off” in the face of another man who is reported to have refused to stop playing YG and Nipsey Hussle‘s protest track ‘FDT’ – which is an acronym for ‘Fuck Donald Trump’.

As the video progresses, a third man can be heard saying “You shouldn’t even be here, bud.” The first man then appears to say “I’ll fuck you up” before suddenly throwing a punch in the face of the man said to have been playing the anti-Trump track.

TMZ reports that the man responsible for the assault is 44-year-old Jason Lata. According to Denton police, Lata was arrested and charged with assault causing bodily injury on Saturday night. His bail was set at $15,000.

You can see the video of the incident below:

Last week, the president and first lady Melania Trump confirmed that they are self-isolating after testing positive for the coronavirus.

Trump tweeted the news on Friday morning (October 2), writing: “Flotus and I have tested positive for COVID-19. We will begin our quarantine and recovery process immediately. We will get through this TOGETHER.”

Soon after, Kanye West shared a message on social media saying that he was praying for the pair.

West, who is running against Trump in the upcoming presidential election, took to Twitter Saturday (October 3) to express his concern for the president and first lady while offering prayers to them both.